After two years in Devon and one year in Cornwall, thoughts turned back to north Devon for the 2014 Plymouth IVC weekend. A modern house Treetops high on the cliff near Combe Martin proved to be the ideal venue. The view was stunning and was greatly enjoyed by the group photographed on the left. The accommodation was able to take eleven of us, and another three members stayed locally. The weather was very kind to us, even scorching at times, and everyone joined in with providing and making the meals as usual.

Most of Saturday was spent exploring Ilfracombe. A number of us took a wildlife boat cruise along the coast to Exmoor, whilst others shopped or stayed on the beach. The evening saw us gather in the oldest public house in Ilfracombe, the George & Dragon, reputedly dating from 1326. 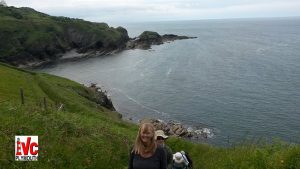 The Sunday morning minibus taxi took all of us to Hele Bay, where lunch was taken either in the Hele Bay Inn or on the beach. The afternoon walk was from there along the South West Coast Path back to Treetops.

Once again, it was very pleasing to be able to organise such a brilliant weekend and satisfying that such a large proportion of the club were able to attend!